What a great day to finish the winter season with! It was pretty well as the forecast predicted with the thermals starting at around 10-30 and getting stronger as the day went on. Perhaps not quite as good as we thought but still a very good day.

Most members had good long flights but occasionally you could launch at just the wrong time and you were back on the ground a few minutes later but if you took another launch straight after, you usually got away. The conditions changed that quickly. The wind was a little more north than we hoped it would be so we were limited to around 1200′ which was usually enough but not always.

It was certainly the best day of the year so far with some very long flight times, total launches and hours flown. Mike and Barry both set off on long tasks, I believe Mike got around in his LS10 but in the end Barry with Keith in the Duo Discus had to use his Iron Topsail to get home. Congratulations to Jesal P. who successfully converted to the Junior and then showed us all how it was done by staying up for 52 mins, then making a perfect landing. I am sure that Nick is finally a happy man after getting his Dart 17R back on line after it had not flown for nearly 18 months. Whatever was done to it certainly worked as he had the longest Non-Turbo Flight of the day with 2hrs 10mins. Life in the old dog yet me-thinks ! (Now is that the glider or Nick ?). 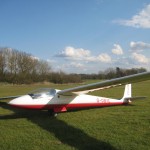 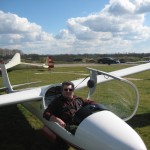 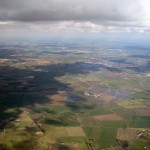 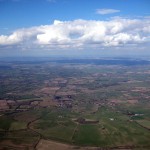 So to the statistics which are impressive……………..

Longest Flights (with out assistance)……. 4hrs. 26mins and 2hrs 10mins. Well done to Mike and Nick.

Longest Flight…………….4hrs. 58mins……Well done to Barry and Keith at least for their perseverance.

Great day, great fights, great fun, which is really all that matters and most of all thanks to all the members who have helped to make the winter flying, which at times was in very difficult conditions, such a success.