We were chased away by a big CB today!

In a weak easterly wind, we set up with the launchpoint at the west end of the field. The field condition is pretty good now having had several days to dry in warm weather.

Speaking of warm weather, the club weather station recorded a high of 22 degrees today in 85% relative humidity. “Muggy” was an understatement. The visibility wasn’t fantastic with a moderate haze which although not obscuring the lateral view of the ground too badly, was masking the approach of expected towering cumulus and CBs.

All of the club pure gliders flew, the LS4 coming out late as two members wanted to fly it. The Astir was lined up for Kit and David D to convert onto but their intentions were scuppered by rumbles of thunder from an as-yet invisible approaching CB. Hopefully the field doesn’t get too much of a drenching this evening and the weather plays ball so they can have another try tomorrow. 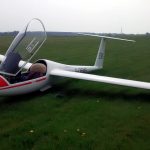 Last out and first in. Stratford’s LS4 hangar-lands before a big CB arrives 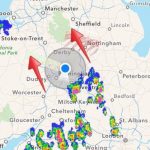 A string of CBs march up the country

Soaring wise, the thermals were slow and the visibility poor enough that no private gliders turned up at the launchpoint but Iain R managed a one hour flight in the SZD Junior scratching between 1,500′ and 1,700′. The next nearest flights out of 26 launches were only a quarter of that duration.

Ultimately, the rumbles of thunder decided that it was hangar-landings for the aircraft aloft and a long tow-home for the others. The hangar was packed with just a bit of time to spare before the first rain arrived.