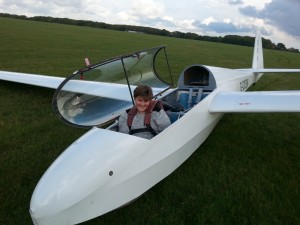 Richard who is 15 years old is our youngest ever solo pilot and we believe only the 20th under-16 BGA solo glider pilot.

Richard was sent solo in K13 G-DCBW as his dad, Neil, who is also a student glider pilot, watched with pride.