With RASP and TopMeteo suggesting in the days before that Sunday would be a good day, our members were looking forward to it’s arrival. For this time of the year it certainly didn’t disappoint and the following report gives a small insight to what we got up to from Snitterfield that day.

One of the most fought-over trophies at our club is the one awarded for the first 300km of the year. Andy our Chairman, and Mike decided they’d go head to head to try and win the accolade and the first bragging rights of the season.

Initially the sky didn’t look too promising so whilst we eagerly awaited it becoming thermic the ab-initios cracked on with their training and check flights.

Once the first gliders began to stay up Andy took a launch in his LS8 which was soon followed by Mike in his LS10. As they set off we placed bets on who would complete the task first!

With the cloud base starting to rise, Ben our 14 year old solo pilot, set himself the target to complete his 1hr Bronze soaring achievement and so took a launch in one of our K13’s. 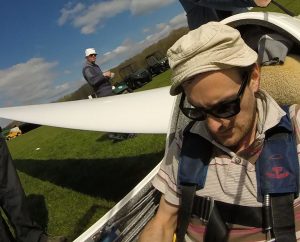 Dan in his Lak 19 and myself in the club’s LS4 set ourselves a 121 km task to blow away the winter cobwebs and to practise team flying in readiness for the Bidford Regionals later in the season. The task Dan suggested was Snitterfield W – Pershore – Banbury W – Alcester – Snitterfield. Dan launched first and I followed 10mins later – (Thank you Ben for marking my first thermal!) After a couple of climbs over Stratford to warm up we went through the start line and set off towards Pershore. We went around the majority of the task together working the sky between as we progressed. Apart from one low point over Shennington GC it was relatively straight forward to get around task ending with my first competition style finish.

For those who are interested the traces of our flights can be found here:

Meanwhile back at the club everyone was making the most of the conditions.

Ben could have easily completed his 2 hour achievement but the need for two-seat gliders meant he came down after 1hr 20mins to allow others to fly. Well done still on your completing your 1hr on the first attempt and showing your dad up on the day!
Nick rigged the “best Dart in the country” and flew for a couple of hours with the rumours suggesting he ventured as far as Wilmcote.
Neil and Kit, both yet to complete their X/C endorsement still managed to tick off some local turnpoints in the club’s Astir whilst staying in gliding range. 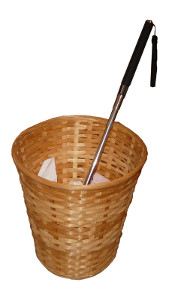 Back to the main event – the 300km battle. In the end Andy was the first to complete the task crossing the line about 5mins before Mike. Well done to both, but the winner of the trophy goes to Andy.

You can view his flight details here. http://www.bgaladder.co.uk/dscore.asp?FlightID=63305&RC=X

Stats for the day

Thank you to all the instructors on duty that day especially as you missed the chance to fly your own gliders.

And finally. With Ben completing his 1 hour Bronze soaring flight he is starting to cement his position at the top of the achievements badge ladder. But who’s going to win it this year? Click here for further information and the current standings. https://www.stratfordgliding.co.uk/members/badge-ladder/