56,000 ft: The sum of all the maximum height gains from Stratford members flights at Sutton Bank – the most successful week in almost a decade.

The first week of September sees the Stratford bi-annual club expedition to Yorkshire Gliding Club at Sutton Bank. This year was no different with over a dozen members from early solo to pundits with several thousands of hours making the pilgrimage, with one straggler from Trent Valley Gliding club. 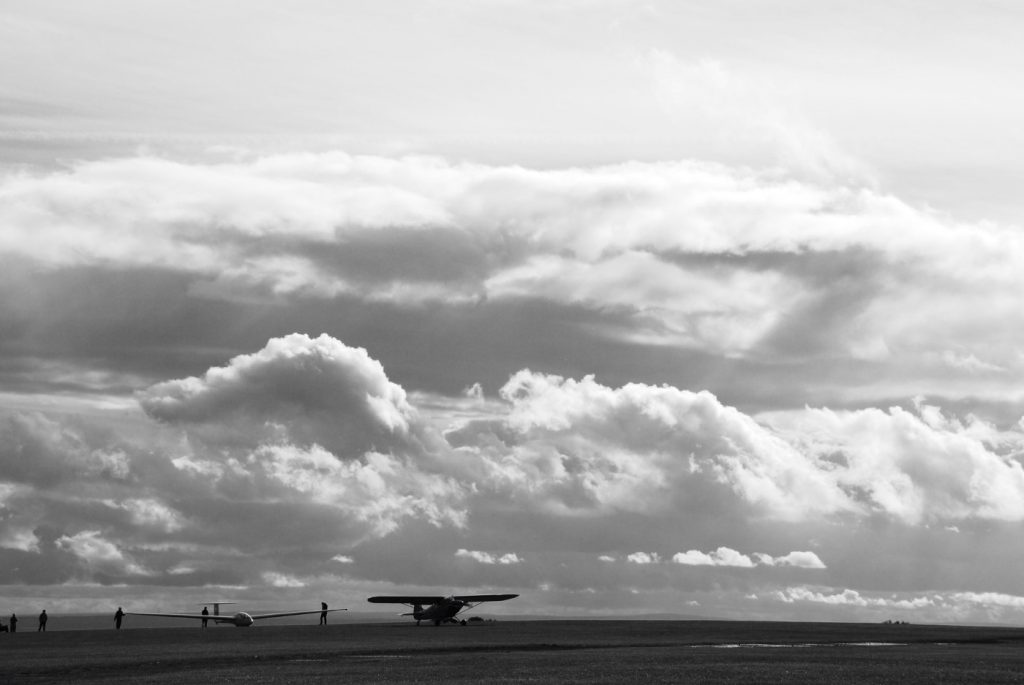 Photo of a K-21 launching at Sutton Bank. Image courtesy of Sharon Kerby.

With cloud base at approximately 500 ft QFE the day seemed all but scrubbed. However, late afternoon the front moved through to reveal a clear evening sky. The first flight took off at 16:00. Barry Kerby kindly aero-tow checked Paul Mcauley, Keith and Rois Lorenz. Neil and Richard Croxford proceeded to have several aero-tow training flights. 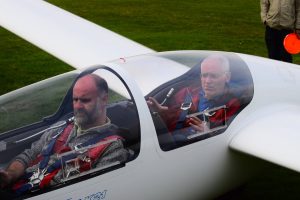 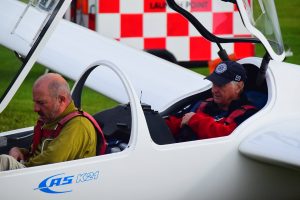 With the met office forecasting good wave all the pundits scrambled to their gliders, with the remaining Stratford pilots setting up the launch point. Neil Croxford and Andy Parish proceeded to have one of the first flights in the DG 500 and quickly climbed to 7000 ft QFE, only having to return on account of the large flying list.

Barry Kerby and Keith Lorenz were the first privateers to launch contacting well organised wave almost immediately after release from aero-tow, and quickly out climbed Neil and Andy in the DG 500. They subsequently went for a 4:30 minute tour around the Yorkshire countryside in 666 reaching FL 125 with ease, only having to stop the ascent due to an active airway. 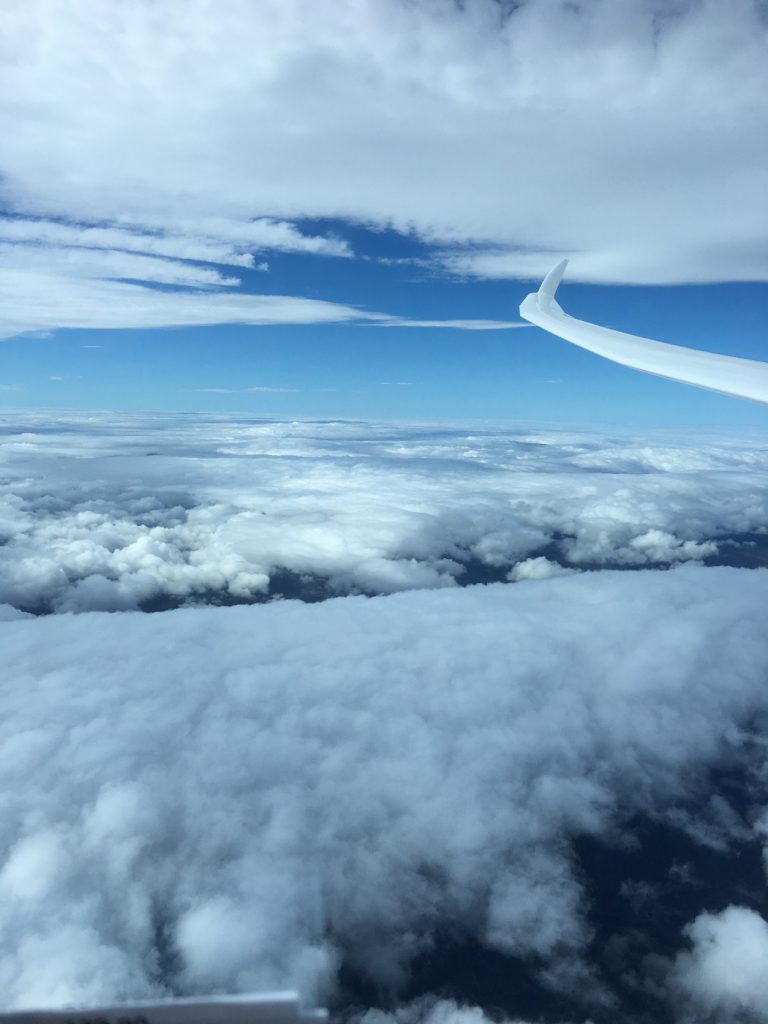 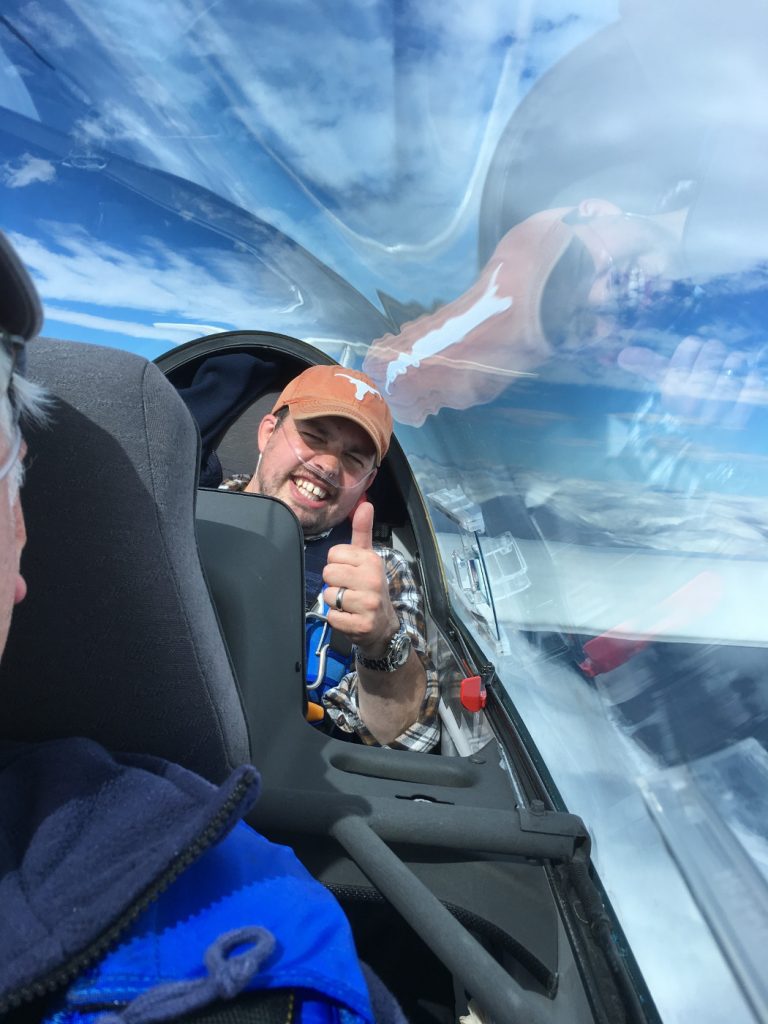 Barry Kerby and Keith Lorenz in 666 at FL125. Images courtesy of Barry Kerby.

Hearing of the quick success over the radio of the club gliders and 666 Barry Monslow, Sharon Kerby, Jeffrey Gale, Paul Mcauley and Rois Lorenz all took aero-tows and contacted strong lift. Jeffrey Gale reached an impressive height of 7500 ft QFE were he captured some fantastic photographs. 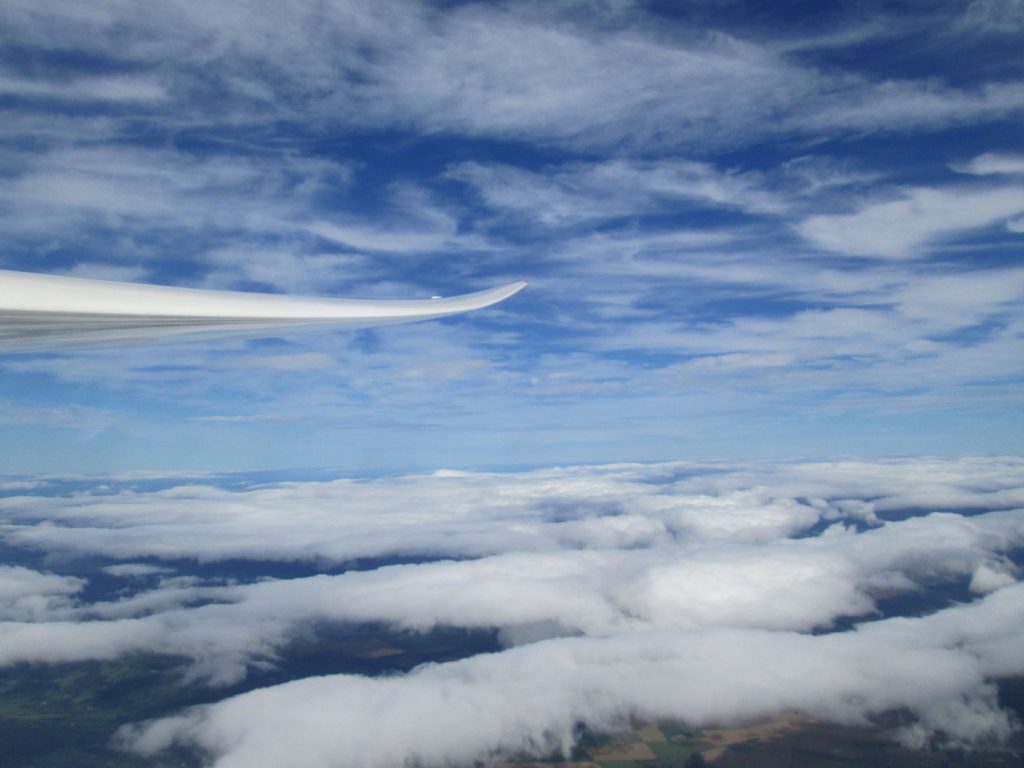 Picture from 7000 ft QFE. The Yorkshire Dales are just visible in the distance. Image courtesy of Jeffrey Gale

Wednesday saw a southerly wind bringing unusual some strong lift. All the pundits had several hours local soaring. Paul Mcauley set a 100 Km cross-country task, set off early and made good progress on track. However, the weather was less favourable down south and he landed out safely at Pocklington and consequently had an aero-tow retrieve back to Sutton Bank.

Thursdays wind was SW at 20 knots gusting 30, a classic day for the ridge to work with the Met Office predicting wave. Keith Lorenz participated in a aerobatics course ran by George Rizk from Saltby and practiced some manoeuvres from the basic aerobatics badge syllabus.

Barry Kerby and Rois Lorenz took an early winch launch in 666 along with Jeffrey Gale in 643 onto the ridge which seemed to work well. This was followed by Sharon Kerby and Barry Monslow taking an aero-tow in an attempt to contact wave.

Keith Lorenz took a late aero-tow at 16:10 in 302. By this time most of the privateers had little success with the wave and had been forced back on the ridge taking the occasional thermal. Sharon Kerby successfully contacted wave just North of Lake Gormire and radioed her find. Sharon very quickly climbed to 7500 ft QFE and marked the way for other gliders. Following this Keith Lorenz contacted the same lift and climbed to 11,800 ft QFE in a large blue gap.

Panoramic picture of the evening sky from 302. Image courtesy of Keith Lorenz

Keith Lorenz then subsequently pushed into wind in search of lift but it seemed to bottom at the same altitude as the previous wave bar. Conscious of daylight and strong winds on the surface Keith headed back home and landed at 19:10 missing out on his gold height by 120 ft. 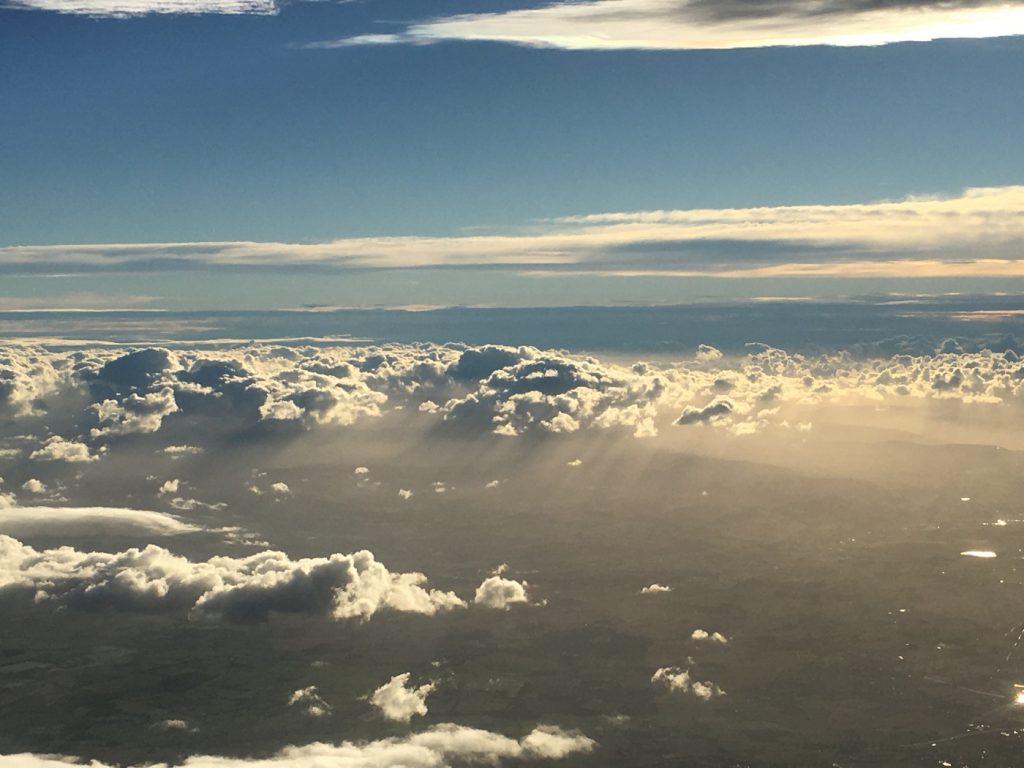 Picture of the evening sky from 302. Image courtesy of Keith Lorenz

News quickly spread of the successful week to members back at Stratford which prompted Chris Edkins to fly up from Wellesbourne in a PA32 Saratoga. He landed at Bagby at 19:00. 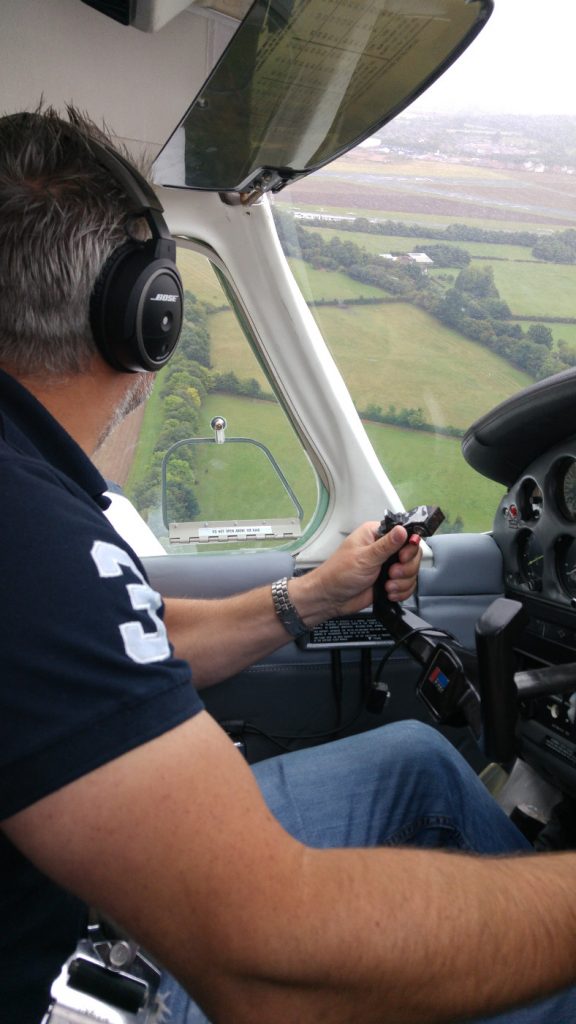 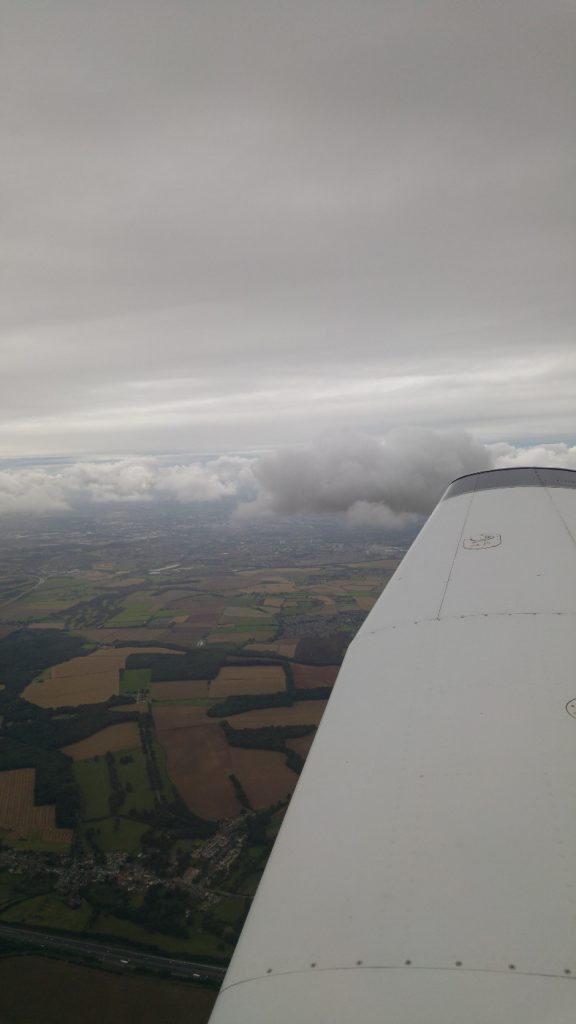 Left: A picture of Chris flying the Saratoga into Bagby. Right: Picture of the flight to Sutton Bank. Images courtesy of the Saratoga’s in flight photography system.

Friday saw a strong SW wind with the Met Office forecasting some wave. Barry Kerby and Chris E took a high aero-tow in 666 and contacted ‘difficult’ wave and climbed 5000 ft to 9000ft QFE. In addition to this Barry Monslow and Jeffrey Gale had similar flights in UG and 643 respectively. Both taking high aero-tows and contacting ‘difficult’ wave and making solid progress.

All members de-camped. Chris E and others, flew back from Bagby to Wellesbourne in difficult conditions – nothing too difficult for a man with 1000’s of hours powered flying.