Long time no blog, but the conditions this Sunday are worth a mention.

The day started out with overcast and some evidence of high level wave but, as forecast, conditions did improve and at about 12:30 people started to soar.  Andy (Balkwill), Barry (Kerby) and Sharon set off on task to the west. The conditions were difficult early on with wave interference fairly noticeable (smooth thermals, rough thermals and amazing sink).

After low points by Sharon (800ft near Feckenham) and Barry (apparently reading the clock tower at Bromyard) things got even more interesting.   Sharon entered a smooth thermal marked by a wisp of cloud and climbed through the wisp to contact the wave just east of Feckenham, eventually climbing at 4knts average in a line running roughly Feckenham to Pershore.

Andy and Barry came back from the west.  Andy carried on with his task but Barry contacted the wave near Pershore as did Steve Brown. The wave moved a little at about 7,500ft and then again at 8,500ft, aligning more with Alcester – Long Marston.  The climb rate reached 6kts at times.  Steve reached 9,000ft, Barry topped out at 10,000ft and Sharon broke her climb off at 11,800ft (just beating the club record previously set by Harry Williams in his K6E).

After 3 hours the wave slots started to fill in and Steve, Barry and Sharon returned to site with photos and in-flight video (Steve!). Some of Sharon’s pics are below and we hope to upload Steve’s video at some point.

On the cross country front, Paul McAuley deserves a mention. Paul was the only person to complete a cross country task on Sunday and won the day.  He flew a 110km triangle (Snitterfield, Pershore, Banbury) in a fairly brisk wind and what were sometimes difficult conditions.  Well done Paul.

P.S. We would like to blog more often so if you want to update us on activities at the club please email facebook@stratfordgliding.co.uk and I’ll pick up the info.   Many thanks. 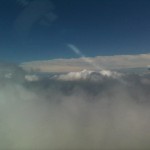 Start of the Wave Climb 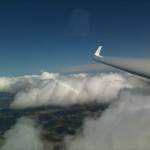 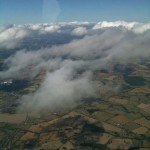 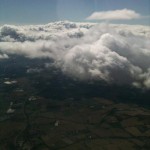 View to the south west on the way down